Looking Back: Reflecting on Collections Traces Evolution of Collections

(Santa Fe, New Mexico) --- New Mexico’s present day museum system, which includes eight museums and eight Historic Sites under the Department of Cultural Affairs, evolved from the Museum of New Mexico established in 1909. Now, the New Mexico History Museum (NMHM) explores the extensive holdings amassed by the Museum of New Mexico over the past century in a new exhibition entitled Looking Back: Reflecting on Collections which opens March 6, 2020 with an opening reception, Sunday March 8. The exhibition runs through March 7, 2021.

Curators and museum staff have compiled more than 300 photographs, documents, and objects from the museum’s collections which illustrate how and when the NMHM acquired its vast holdings since its founding. This exhibition traces the collecting evolution – from private hands to public institution – and the challenges posed in maintaining thousands of objects and millions of photos.

Alicia Romero, lead curator: “We wanted to tell the background story of some of our collections. Museums don’t always talk about the context under which objects or images came to the collection; we’d like to share with the public some of the questions we’re grappling with as a 21st century museum.”

Beginning in the late-nineteenth century, Looking Back explores early collecting at the Palace of the Governors and move quickly through time to the 1930s when the Works Progress Administration created and preserved local collections of oral histories and arts and crafts. Visitors will be delighted to see a sampling of the vast collections in the Palace of the Governors Photo Archives from historic portraits and landscapes to contemporary work.  Next, the exhibition challenges what it has meant to capture “the West” through material objects. Finally, curators have brought out some hidden gems from the extensive collections to discuss.

The campus of the New Mexico History Museum includes the Palace of the Governors, the Fray Angelico Chavez History Library, and Pete V. Domenici Building. The Palace of the Governors is noteworthy as the original seat of New Mexico government, the initial home for the Museum of New Mexico, and for its designation as a National Historic Landmark. The New Mexico History Museum presents exhibitions and public programs that acknowledge and reflect on New Mexico’s diverse heritage. Special features include the Palace Press, Native American Artisans Portal Program, and collections held by the Palace Photo Archive, and Chavez History Library The museum also serves as a center for education and historical research.

113 Lincoln Ave. in Santa Fe, NM 87501. (505) 476-5200. Hours: 10 a.m. to 5 p.m. daily, May through October; closed Mondays November through April.  Events, news releases and images about activities at the History Museum and other divisions in the Department of Cultural Affairs can be accessed at http://media.newmexicoculture.org/. 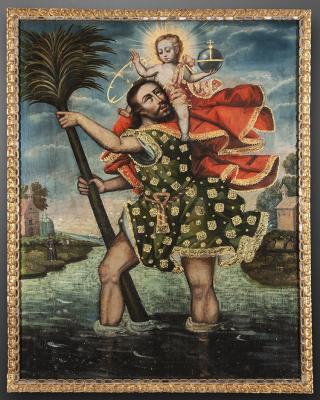 One regional community that captured the attention and imaginations of artists were the Penitent Brotherhood, Picturing
more »